The black ghost knife fish is a unique creature indeed. It’s found primarily in the tropical freshwater lakes and rivers of South America, namely Argentina, Brazil, and Venezuela. Large, scaleless, and black with a wide mouth and fluttering fins along its underbelly, the black ghost knife appears quite menacing at first glance. But is it aggressive?

The black ghost knife fish is naturally more aggressive and territorial than alternative species of knife fish – which tend to be timid and shy, for the most part. They’re especially hostile towards other knife fish and will prey on smaller fish when in captivity.

Now that you know the black knife ghost fish is aggressive towards other species of knife fish, let’s dive deeper into this topic, shall we. Together we’ll learn if it can live with other fish in a community tank, if it’s territorial, if it has teeth, what it eats, and whether (or not) it can harm you if you feed it by hand? We’ll also discover how to properly setup a tank to keep black ghost aggression levels at bay.

So, if you’re ready to learn more about the temperament of the black ghost knife fish and its social habits/behaviors in a captive environment, then let’s get started!

Can the Black Ghost Knife Fish Live with Other Fish?

Black ghost knife fish can live with others in a community tank environment. The key is to stock the aquarium with peaceful fish of similar size like South American cichlids and/or catfish. Don’t add tiny fish to the tank as black ghosts are omnivorous and will likely eat them. If you intend to have a few smaller fish as well, then you must ensure the aquarium is quite large with plenty of hiding places.

Black ghost knife fish can live harmoniously with angelfish, provided they’re of the same size and the tank is big enough. Both species dwell in similar habitats, which include slow-flowing freshwater rivers and lakes in Argentina, Brazil, and Venezuela. That said, you should still have plenty of hiding places in your tank for angelfish to take cover if need be.

Black ghost knife fish aren’t that compatible with betta fish. The black ghost is larger, more hostile and would likely kill the betta. The betta is considered semi-aggressive whereas the black ghost is aggressive. The only way it may work would be to introduce them to the tank at the same as juveniles so they can grow up together.

It’s usually not recommended that you keep more than one black ghost knife fish in the same tank. However, if you purchase them young and allow them to grow up together, they can live together peacefully – provided the tank is very large and gives each fish enough space to claim its own territory.

In an overcrowded or too small tank, black ghost knife fish can become territorial. This then leads to increased tension and hostility. To keep this species calm, you should keep it in a very large tank – around 100 gallons or more. If you have more than one black ghost in your aquarium, you must increase the size of the aquarium significantly by an additional 80 gallons per fish!

Black ghost knife fish are toothless. You’d think that being a type of omnivorous fish that prefers meaty foods, they’d need teeth to attack and eat their prey. Instead, they have a large, elongated mouth that opens wide to catch smaller prey before swallowing it whole.

Black ghost knife fish are nocturnal and like to feast at night on tiny fish, small crustaceans, and insect larvae. They’ll also eat frozen worms and brine shrimp. Plant-based pellets and flake foods can be fed to them as well. Being a large fish, they need to be fed a significant amount of food at least once a day. 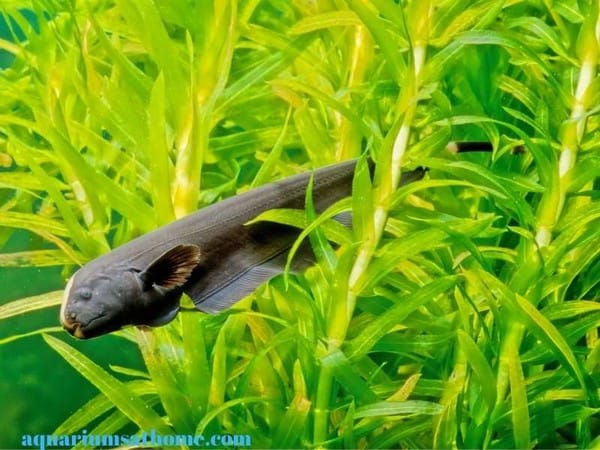 How Big does a Black Ghost Knife Fish Get?

Black ghost knife fish get to be quite big when fully grown. They can reach a maximum length of 20 inches which requires them to have a very large aquatic environment in which to swim and forage. The absolute minimum sizes tank for a single black ghost is 80 gallons.

How to Setup a Tank for Black Ghost Knife Fish?

To safely setup a tank for black ghost knife fish to keep their aggression levels at bay, follow the steps outlined below:

*Should you notice your black ghost aggression levels rising, you must consider re-homing it to its own aquarium, especially if it’s putting the healthy and safety of other tank inhabitants at risk. These fish are also prone to skin flukes and bacterial parasites. ‘Ich’ disease is a problem so if you see your black ghost rubbing itself along rocks and other decorations in the tank, you must remove and treat it immediately.

As to whether black ghost knife can shock you or not, the answer is no. Though they do produce an electrical current via a small receptor along their snout, the stream is weak and mainly used to detect prey at night. In fact, this species has the uncanny ability to identify your presence in a room and rush up to the top of the tank to greet you! It will even lay on your palm and take food directly from your hand!

To summarize, the black ghost knife fish tends to more aggressive and territorial in comparison to other species of knife fish. Their hostility is manifested when housed in an overcrowded tank that’s too small. Therefore, it’s best to keep just a single black ghost in a tank at a time (if possible).

I hope this article has been of help to you and answered your questions regarding the temperament of black ghost knife fish when in captivity. Thanks for reading and good luck with your aquarium hobby!

How do You Breed Black Ghost Knife Fish?