Chances are, if you’re like most people, you first fell in love with clownfish after watching ‘Finding Nemo’ the much beloved animated film by Disney! After the movie was released back in 2003, the popularity of clownfish shot through the roof, and so did the desire to have them as pets!

Yes, you can keep different species of clownfish together – provided you have a large enough tank to give each fish adequate space to swim and explore. If confined to a small tank, the larger clowns my bully or attack the smaller ones. Therefore, it’s imperative that you make the aquatic environment safe by mimicking their natural habitat as closely as possible.

Now that you know it’s generally okay to keep different species clownfish together in a tank – under the right circumstances, that is – let’s explore this topic further in more detail. I’ll explain the various types of clownfish, which ones make the best tankmates, and how many to have based on the size of your tank. I’ll also discuss how to keep clownfish ‘happy’ and reduce their naturally aggressive tendencies.

So, if you’re ready to learn more about clownfish and how to keep different species together in a community tank environment, then let’s get to it! 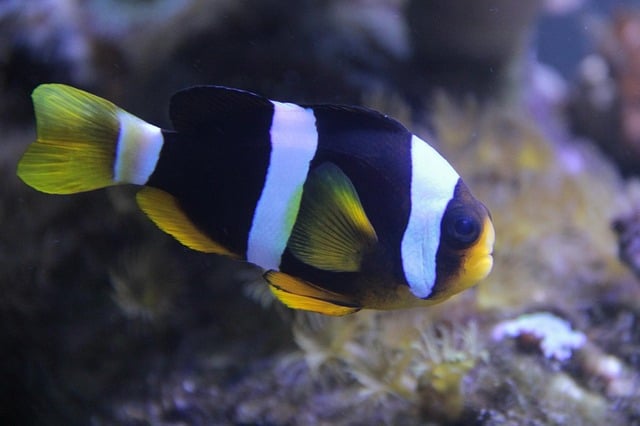 What are the Different Types of Clownfish?

Without a doubt, the most popular type of clownfish is the ‘orange’ version like the one in ‘Finding Nemo.’ However, there are upwards of 30 different species of clownfish – each with its own distinct appearance and personality. Let’s take a look at the more common choices for saltwater aquariums.

Also known as the ‘fire’ clownfish, cinnamon clowns are one of the larger species and can grow to 5 inches in length! They’re semi-aggressive and territorial in nature therefore, they should be kept in a fish-only tank.

Maroon clowns are the largest types of clownfish and can reach a whopping 7 inches in length! The females are known to be highly aggressive, even with mated pairs, and should be kept in a community with other big, boisterous fish.

Unusually pale compared to its clownfish cousins, the pink skunk clown is easily bullied due to its docile nature. This species likes to live in small groups while sharing a single large anemone. The pink skunk clowns grows to about 4 inches long and can live for over 20 years in captivity!

Saddleback clowns reach between 4 and 5 inches in length and semi-aggressive in nature. They like to stick close to their anemone host and can be kept with smaller, more docile fish. Easy to care for, this species can thrive in a community tank environment.

Like their close cousin the cinnamon clownfish, tomato clowns are about 5 inches long, semi-aggressive and territorial in nature. They can be intimidating to other smaller fish and should be watched closely as they mature to see if they ‘harass’ other tankmates.

Often referred to as the ‘orange’ clownfish, the true percula is one of the smallest and most sought-after types of clownfish. They grow about 4 inches long and tend to be more peaceful than their larger clown cousins and therefore can do quite well in a community tank environment. 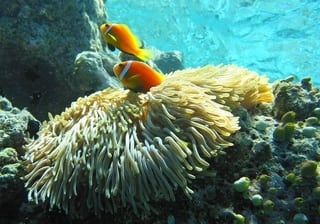 Which Species of Clownfish Make the Best Tankmates?

Keeping clownfish in a community tank depends not only on how much room they have but also on their size and individual temperaments. Contrary to popular belief, not all species of clownfish can live together in harmony.

Cinnamon clowns, for example, should be kept with bigger species like tomato or saddleback clowns. The only time they should be kept with a smaller species, like true percula clowns, is if you have a very large tank with plenty of hiding places for the perculas to retreat to.

Maroon clowns are very big and highly aggressive. They won’t tolerate any other species of clownfish and if given the chance, will either kill or eat them! That said, you should only keep 2 maroons together in an aquarium – one male and one female, if possible – regardless of tank size.

Saddleback clowns are fairly docile and can be kept with other smaller clownfish like the true percula, for example.  You can also keep saddlebacks with cinnamon or tomato clowns, but your tank must be very large and preferably planted.

True percula clowns are the easiest to keep and usually get along well with each other. They’ll thrive in a planted tank with an anemone and can live in harmony with their smaller cousins, like the black percula or false percula clownfish.

The pink skunk clowns are docile in nature and can live peacefully with the true percula clowns. This species shouldn’t be kept with its more aggressive cousins, such as the cinnamon or tomato clownfish. It could likely cohabitate with the saddlebacks clowns as well.

How Many Clownfish Can You Put in a Tank?

If you already have one clownfish and are thinking of adding a second one to your tank, be sure the new addition is smaller and of the same species. That way, the larger one can morph into a female, which will lessen its hostile tendencies. Bigger is better when it comes to tank size for clownfish, so be sure your two clowns are kept in an aquarium no smaller than 20 gallons.

Will Different Species of Clownfish Fight Each Other?

Different species of clownfish will fight each other if they feel threatened or that their territory is being invaded. Maroon clowns are the most aggressive and will not only kill but also eat smaller species of clownfish! If multiple pairs are placed together in a community tank, the pairs will often fight to the death until there is only one pair remaining.

Adding an anemone will often increase aggression in both wild-caught and tank-bred clownfish. The clowns will likely fight, even to the death, for the right to host the anemone. Even the tiny true percula clownfish can get hostile and belligerent towards others of the same species, especially in a tank that’s too small (which is anything less than 20-gallons, in my opinion).

What Can I Do to Keep Aggression in My Clownfish Down?

To reduce clownfish aggression and create a more peaceful community tank environment, you should ensure you are keeping them in as large of an aquarium as possible – the bigger, the better! Also, you should try to mimic their natural habitat as closely as possible, which is that of an oceanic coral reef – warm water, lush plants, live rock, sandy bottom, etc.

As well, allowing for periods of darkness (12 hours) will also help since clownfish tend to be more aggressive during the day when there is plenty of (sun)light. Having more than one anemone in the tank is also a good idea as this prevents the clownfish from having to compete to host it. Finally, making sure to only keep clownfish of the same species and no more than two per tank is also recommended.

To conclude, it’s possible to keep clownfish of different species together, provided you have a large tank with plenty of room for the fish to swim and explore. When confined to a small aquarium, some of the bigger species of clownfish may attack or bully the smaller ones due to their aggressive and territorial nature. Creating a safe aquatic environment conducive to that of their natural ‘wild’ habitat is vital.

Hopefully, you’ve found this article to be both interesting and informative. Thanks for reading and good luck with your clownfish saltwater aquarium!

How Do I Know if My Clownfish are Paired?

What are the Easiest Saltwater Fish to Breed?

What are the Easiest Fish to Take Care of?