When you see goldfish in a pet shop, they’re often swimming about in a tiny fishbowl. While this may seem okay to most people, experienced aquarium hobbyists know that goldfish should only be kept in such a small space temporarily. Perhaps you have a 10-gallon tank and are wondering if (and how many) goldfish can be kept in it? The answer is:

Small species of goldfish such as the twisty tail or bubble eye can live in a 10-gallon tank as they only grow to a maximum length of 6 inches. If you want to keep larger goldfish like the 8-inch fancy tail or the 10-inch comet, then you need a larger aquarium. A 10-gallon aquarium will only work temporarily as a starter tank for larger goldfish otherwise, they won’t grow to full adult size.

Now that you know a 10-gallon aquarium is only good for two young goldfish for a short period of time, let’s explore this topic in more detail. I’ll explain which species of goldfish can live in 10-gallon tank as well as how long they’ll live, on average. I’ll also discuss what happens if you keep goldfish in too small of a tank for too long and how to increase their lifespan when kept in a smaller tank.

And now, if you’re ready to learn more about keeping goldfish in a 10-gallon tank, then let’s get started!

What Species of Goldfish Can I Keep in a 10-Gallon Aquarium?

Only the smallest species of goldfish should be kept in a 10-gallon tank. These include the twisty tail and the bubble eye goldfish. Both types grow to a maximum length of 6 inches (typically 3 to 5 inches) and since it’s recommended that goldfish be kept in pairs, two of either species should do well in a 10-gallon aquarium – if that’s your only option.

Moving them to a larger tank so the two have more room to swim freely and explore their aquatic surroundings is encouraged. Goldfish like to engage with other fish, especially those of their own kind. And while you may be tempted to keep just one in a small 10-gallon tank, don’t! Solitary goldish can suffer due to lack of companionship.

How Long Do Goldfish Live in a Small Tank?

The average goldfish can live from 10 to 15 years – if kept in a properly maintained, filtered aquarium that’s large enough for them to swim about freely and grow to full maturity. A balanced diet and the correct water parameters are also key. When kept in too small of a tank, goldfish can die sooner than they normally would due increased nitrite levels from the tank not being adequately cleaned/cycled. 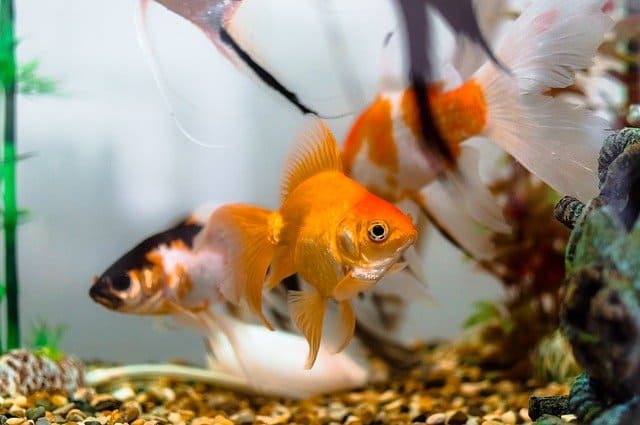 What Size Tank Do I Need for Two Goldfish?

The general ‘rule-of-thumb’ is one inch of fish for every gallon of water. Therefore, the best size tank is dependant on the number and species of goldfish you choose. As goldfish prefer to be kept in pairs, you must account for the total inches, that being the combined length of two full-grown goldfish. And, since bigger is better when it comes to all fish, opt for a larger tank whenever possible.

Can I Keep Four Goldfish in a 10-Gallon Tank?

While it’s possible to keep up to four small goldfish in a 10-gallon tank, keeping only two is better. A pair of twisty tail or bubble eye goldfish can do well in 10-gallon aquarium, provided it’s properly maintained with the correct water parameters. Larger species like the fancy tail, butterfly, comet, or double-tailed goldfish should be kept in a larger aquarium if you want them to reach full adult size.

If you intend to keep a few pairs of goldfish, then you need to upsize your 10-gallon tank to at least a 20-gallon version. And this, of course, is just for the smaller species of goldfish that grow to a maximum length of 6 inches. The larger species, such as the orlanda or shubunkin goldfish can reach lengths of 12 to 14 inches and therefore should only kept in 29-gallon (or preferably bigger) tank.

Will Goldfish Stop Growing to Fit Their Tank?

While there is an element of truth to the theory that goldfish only grow enough to fit their enclosure, it’s more about the quality of the water rather than the size of the tank. When fed adequately and kept in a large, well-maintained aquarium, goldfish will continue to grow until they reach full maturity length. This can be anywhere from 3 to 12 inches, depending on the species.

Goldfish produce a growth inhibiting hormone that builds up in the tank’s water. Therefore, the longer tank water sits, the more likely it will halt the growth of the fish, keeping them smaller than usual. This can be problematic however, as fewer water changes equal greater nitrite build-up in the tank which can be dangerous (and even deadly) for the fish.

How Do I Keep My Goldfish Alive in a Small Tank?

If a small tank, such as a 10-gallon size is your only option and you want to have goldfish, then there are a few things you must keep in mind in order for them to live as long (and as healthy) a life as possible. These include the following:

Remove Goldfish from Their Bowl Enclosure

Although you may purchase goldfish in a bowl at a pet shop, you must transfer it to a tank right away. Make sure the aquarium has a filter and an air pump. If a 10-gallon tank is all you can afford, then only put two small species of goldfish in it. The littlest ones are the twisty tail and the bubble eye.

Use Treated Water Only

Tap water is not good for any freshwater fish, including goldfish, as it contains chlorine which can kill goldfish in less than a day! Therefore, you must fill your aquarium with either filtered water or tap water that has been properly treated.

Tetra Aquascape Water Plus Conditioner a great dechlorinating product that helps to neutralize harmful chlorine and other hard water minerals. It can be easily found in your local pet store or online through Amazon.

One of the worse things you can do is overfeed your fish. Too much food in an aquarium ends up rotting at the bottom, increasing nitrites levels and ultimately contaminating the tank. Goldfish only need a small amount of food (such as tropical fish flakes) each day to thrive.

Aquariums can get ‘dirty’ very quickly and therefore require regular cleaning by way of partial water changes every other day, if possible. Rotting food and waste material sit on the substrate, releasing toxins into the water that can cause illness and/or death to fish if not removed.

Placing decorative items in the tank (to keep goldfish entertained and reduce stress) will create a happier, healthier aquatic environment. Fill the bottom of the aquarium with colourful pebbles and place a mirror inside. As well, add a few caverns or hiding places for fish to retreat to or swim through.

The general ‘rule-of-thumb’ is one inch of fish for every gallon of water. You want to keep them in pairs to provide them with companionship and to promote activity. Therefore, you must account for the total inches, which is the combined length of both fish.

I trust this article has been of help to you. Thanks for reading and good luck with your freshwater tank!

What Kind of a Tank Do You Really Need for a Goldfish?

Can African Dwarf Frogs Live with Goldfish [and Survive?]

How Many Zebra Danios in a 10-gallon Tank?

What Kind of Water do Goldfish Need?